The start of Bonaire’s sport diving industry can be traced back to a momentous event which took place in the year 1962 with the arrival on the island of Captain Don Stewart.

The 37 year old Don, an American born in California, had a wild and eventful life behind him when he arrived on Bonaire, penniless and eager to work. He had purchased the 69′ twin masted schooner “Valery Queen” in 1955 with the intention of renting it out to Hollywood studios as a pirate boat. When it turned out to be rather too small for this purpose, the boat found its niche as a location for the wild boat parties with which Don passed his evenings. Boat chartering drove him south until he finally made it through the Panama Canal and into the Caribbean. On his way to Antigua, Don found himself in a storm and was wrecked off the coast of Columbia. A bedraggled Don finally arrived on Bonaire on 21st May 1962. 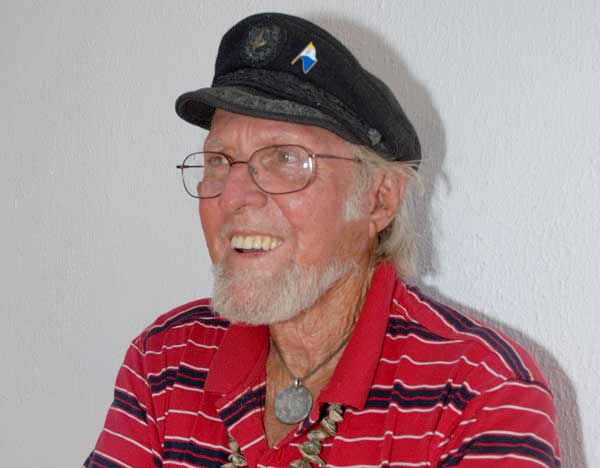 Don wrote of his arrival in his ship’s log: “Dropped anchor in the roads of the township (Kralendijk) former outpost of the Dutch West Indies. Bay like glass, a spectrum of shimmering blues, extraordinarily clear. To the north a craggy silhouette of small mountains sloping southward to a flat spit of coral rimmed beach. Brilliant tropical fish of all varieties. Looks to be a fantastic underwater island.”

Within a year of his arrival Don had set up the island’s first dive operation. It was located at the newly opened Flamingo Beach Hotel – formerly Bonaire’s camp for detainees during the Second World War. Diving tourism was scant for good reason. Spending your vacation on Bonaire was quite an undertaking. Getting to Curaçao was easy enough but the crossing to Bonaire aboard the “Niagra” could take up to a day and a half. Most of the two thousand or so tourists who came to the island annually did not come to dive, but Don, with his small compressor and five tanks, was determined to change all that.

One of Don’s more ambitious endeavours took place in August 1963. He organized the biggest spearfishing competition the island was ever to see. There were so many competitors and so few hotel rooms that competitors were camped out all over the shore. The result was an incredible orgy of speared fish and a dispirited dive manager (Captain Don) who hung up his speargun never to take it down again. It was a fateful day for Don in one other respect too. It was the day the “Valerie Queen” sank just north of Flamingo Beach leaving him stranded and welding his fate irrevocably to that of his new island home.

For eight years Don successfully ran the Flamingo Beach Club, before moving on and opening his second dive school, which he called “Aquaventure”, located at what was the Sunset Beach Hotel. Captain Don did not allow tourists to mess with the reef. When a diver broke off a piece of coral to take home as a souvenir he would receive a scolding from the captain that he would never forget. The ones who dared yell back at him got punched and even got a free ride to the airport to be put on the airplane to return home. One day a man sitting on the beach was watching the Captain’s tirade at a SCUBA diver who had emerged carrying a piece of coral. This man was Carel Steensma; he was a director of KLM based in Curaçao, and an avid diver who came over to Bonaire on weekends to dive. That day he asked the Captain to sit and talk to him.

Steensma and Stewart combined their ideas and efforts, and the result is today’s Bonaire National Marine Park.

In 1975 Don was instrumental in setting up CURO – the Council of Underwater Resort Operators. Its objective was to “proliferate reef/sea management, to maintain a productive underwater environment and to guarantee the economic health of the community and industry”. CURO is still going strong.