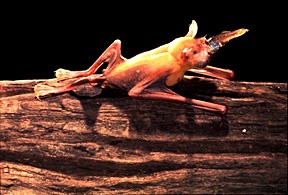 The most remarkable feature of this bat is his ability to catch little fish. When these fish are close to the surface, they make a little rippling. The bats see, or better said hear, this rippling with their echo-location. Then he catches the fish with his long feet and toes. The bats forage in both fresh and seawater.
Other bat species also tip the water, but don’t make the mistake to call them fisherman bats. Those bats need to drink and tip the water with their mouth. 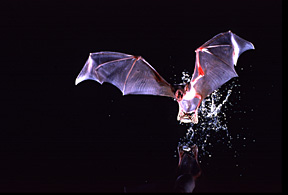 Their jaws are more or less elastic and can be opened widely. This is very useful when eating a fish.

Caves where the fisherman bats are dwelling can be recognized by the strong musky smell. Those caves can be close to the sea, but also inland.

The bat used to be seen often on the leeward side of the island, above the sea. But after Hurricane Lenny struck the island, no sightings of the bats have been recorded; however, there are positive indications of his presence.

The bats are active around dusk and at night, but also they have been seen late in the afternoon, in the middle of a group of pelicans. They are then skimming the surface, zigzagging, in small groups or individually.