General
Mangroves are often considered dimly lit, mosquito-ridden forests. However, these ecosystem, full of mosquitoes as they might be, are very important coastal systems. Scientists believe that mangroves export much needed organic compounds which are in short supply on coral reefs. Also, we know that mangroves offer critical nursery areas for the young of many reef fish and roosting and breeding grounds for many aquatic birds.

Uses of mangroves
Mangroves have been highly managed ecosystems since the dawn of time. Until the advent of synthetic lines, the roots of the red mangrove (Rhizophora sp) were routinely used to strengthen natural fiber lines used in fishing. Traditionally they were used much more intensively than today, for example in boat building and basket weaving as well as to produce charcoal. 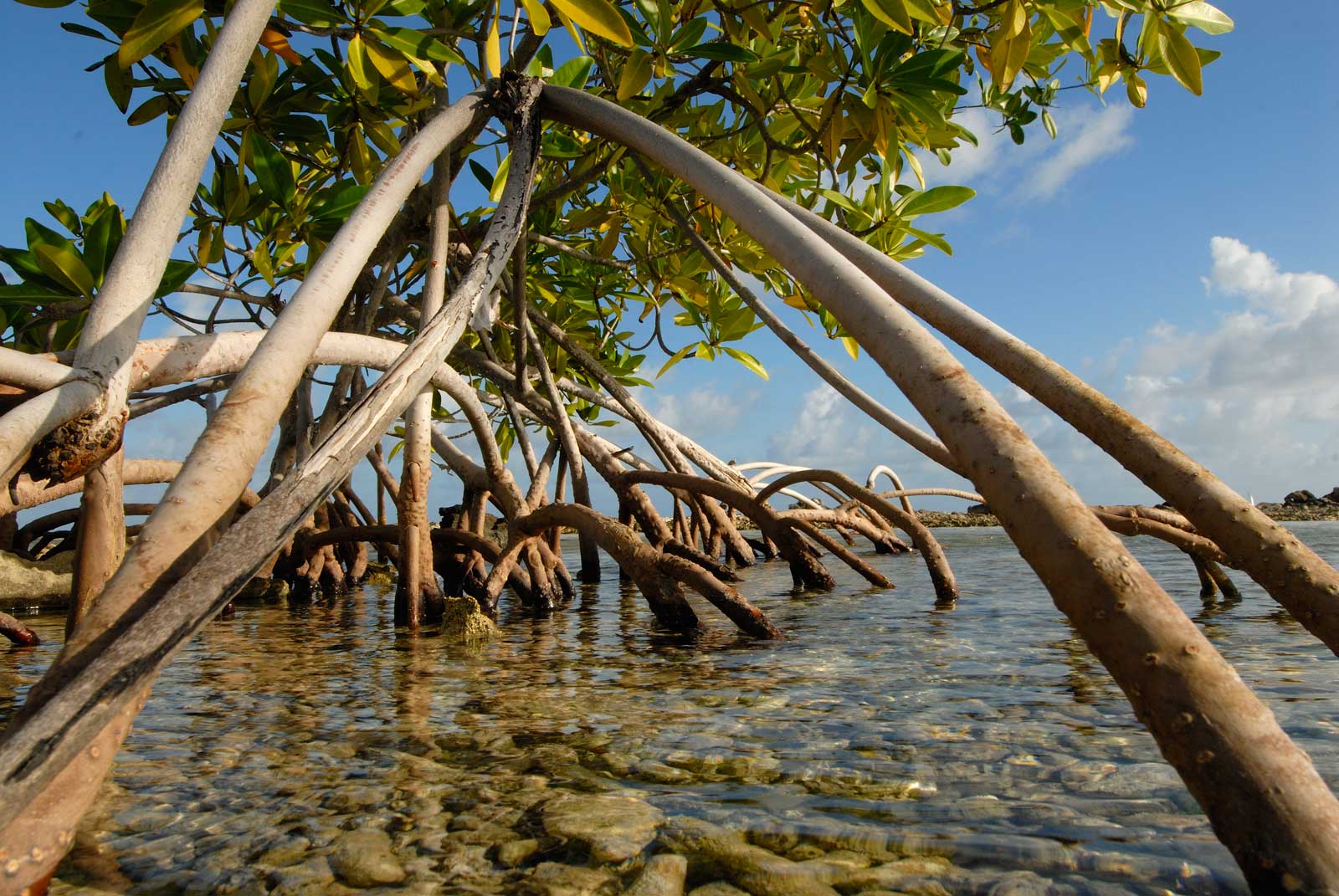 Born survivors
In fact, looking beyond the mud and the mosquitoes, mangroves are fascinating ecosystems. They form dense, often impenetrable forests, choked with tangled prop roots and bathed in mud. Mangroves have evolved the amazing ability to thrive under extremely harsh conditions. Not only can they tolerate high levels of salt but they are also able to cope with more or less constantly waterlogged soil. Needless to say, there are not many of them; only 40 species have been recorded worldwide. Red mangroves (Rhizophera sp) survive by breathing through lenticels (pores) in their prop roots whilst black mangroves (Avecennia sp) send up a field of pneumatophores (aerial roots) around the trunk of the tree through which they breath. All species of mangrove extrude salt through their leaves, which is why the leaves glisten in sunlight. Living as they do, at the interface between land and water, mangroves provide a valuable service in protecting land from the buffeting power of the sea.

Refugia
In addition to resident plants and animals like killifish, tarpon (Megalops atlanticus), snook (Centropomus undecimalis), and mangrove snapper (Lutjanus griseus), mangroves provide a safe haven for nearly every kind of reef fish and many invertebrates at some time during their life. Snorkelling through mangroves is like visiting the reef in miniature. The young of cardinalfish (Apogonidae), snapper (Lutjanidae), grouper (Serranidae), wrasse (Labridae), pufferfish (Tetradontidae), boxfish (Ostraciidae), butterflyfish (Chaetodontidae), damselfish (Pomacentridae), scorpionfish (Scorpaenidae) and grunts (Haemulidae) all can be found milling around mangroves, darting in and out of their rootsy home. Some species such as the commercially important spiny lobster (Panulirus sp) use the mangrove too as spawning grounds. In all, between 60 and 80 different species of fish can routinely be found in mangroves.

Prop roots
Mangrove prop roots form veritable oases of life. The roots themselves are smothered in encrusting life including mangrove oysters and barnacles, mussels and anemones, sponges, tunicates, stinging hydroids and worms.
Crabs are a ubiquitous feature of mangrove ecosystems. Grapsid crabs live underwater, emerging at low water to feast on the mangrove forest floor. They are herbivores, gobbling up detritus, leaves and seedlings. Fiddler crabs also forage on the mud but they are deposit feeders, scooping up sediment and sifting through it for edible particles. The males have a huge, brightly coloured claw which is useless for feeding but vital when defending a territory or attracting a mate.