The Ghost-faced Bat are the largest insect feeding bat on the island. The head and body are 6 to 8 cm and it weighs 15-16grams. They catch their prey by flying low above water and ground.

Sometimes you can hear a typical rattling sound that the bat makes by chattering his jaws.
The face of this bat is very remarkable, as you can clearly see in the picture. It is formed by the complex folding of the skin.

The bats start flying about 10 minutes before it is completely dark. But they are most active around 23.00hr.

They live in caves, preferring the darkest and warmest chambers. Here bats are often seen hanging on both legs instead of just one leg like most bat species. These bats form colonies, but they hang separately. On Bonaire so far only two caves are known to have a population of the Ghost-Faced Bat. The species can be found along the Caribbean coast of South America. 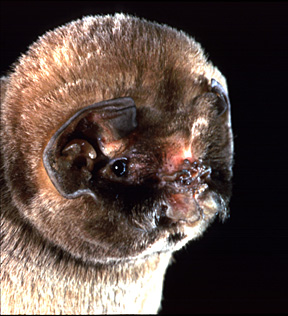 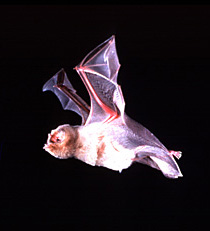