The teams gathered at the entrance of the WSNP at early dawn at the “ Mo Lonshi” High Flying Park. After a some words of welcome by WSNP Manager Mr. Albert Crestian and some hot peanut butter chocolate drinks and cookies, the participating teams started the hike at 7am.

The trail started at the entrance of the park, following the Lagadishi Trail to the north coast to Playa Chikitu, Boka Chikitu, up to the Seru Grandi, Kara Kòrá, Seru Meimei, Ser’i Bentana lighthouse and finished at Malmok at 10am.

The teams were met at the finish at Malmok and were transported back to the entrance of the park where WSNP Manager Albert Crestian thanked everybody for participating and handed out certificates of participation to the teams. STINAPA director Mr. Arjen de Wolff handed over a prize “weekend stay at Slagbaai” to the winning team of the KPCN (police) including a workshop by WSNP Chiefranger George “Kultura” Thode. 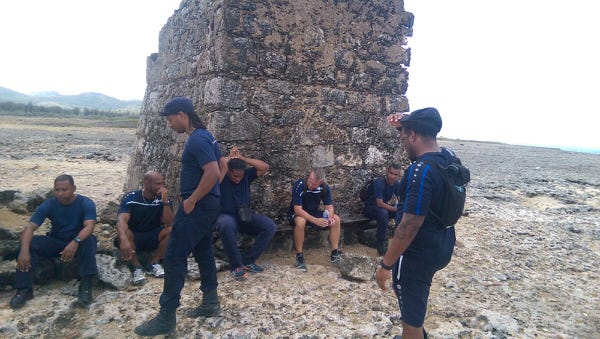 The morning ended with everybody sharing some goat soup, awa di mondi (bush water), like they traditionally prepared in the past.

The teams thoroughly enjoyed the event and already committed to participating next year. The intention is to organize The Kadimo Survival Trail in January as the very first event of the Washington Slagbaai National Park. 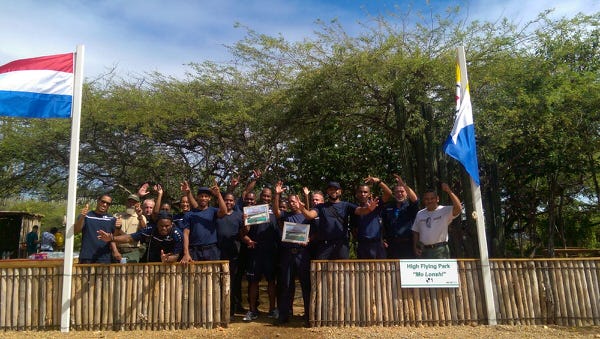