Shrimp or prawns are known as kabaron in Papiamentu. The Banded Coral Shrimp (Stenopus hispidus) is a type of cleaner shrimp found circumtropically. As its name implies, the Banded Coral Shrimp is easily identified by the striking red and white bands on its claws and abdomen. While the shrimp’s carapace, or body, only grows to 6cm in length, its large antennae can grow three times as long. When diving or snorkeling, look for little white antennae peeking out of the reef and you’re sure to find a hidden Banded Coral Shrimp. While these shrimp have been found as deep as 210 m, they are most abundant in the shallow reefs.

The adult Banded Coral Shrimp does not any known natural predators; likely do its symbiotic role between this shrimp and the reef community. Banded Coral Shrimp cleaning stations play an important role as the “hospitals” of the reef. These shrimp sway their antennae from side to side to attract reef creatures to its station. Fish and other creatures approach the station and signal to the shrimp that they need to be cleaned by changing colors or tilting their head up in the water and opening their mouth. These shrimp can be spotted entering and cleaning the jaws of moray eels, removing necrotic tissue from injured fish, and helping rid reef creatures of minute parasites. These tiny dentists have even been known to clean the teeth of patient divers! 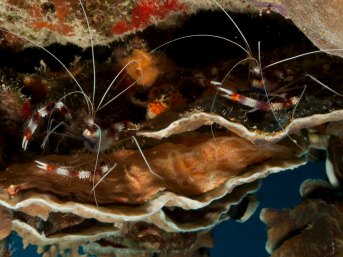