That stars twinkle in the sky AND on the reef? Shooting stars, star tree-toppers and the star of Bethlehem got me thinking about some of my favorite sea creatures…brittle stars. One night dive, about 20 years ago, I was diving near Westpunt, Curacao when my dive buddy, a Dutch teacher, showed me one of the coolest things I had seen on the coral reef (apart from bioluminescent ostracods – that’s in a previous Did You Know). He made me turn my dive light off and then pointed to some brittle star arms that were sticking out of some rubble. He hid his light, waved some water, and the arms GLOWED!!! I was floored…not just because it was so amazing, but because a language teacher had showed this to me, and I was the marine biologist that was supposed to show him things! My respect for my friend, who most certainly had not found his true calling, grew as I happily terrified every brittle star I could find. Now, if you have never seen these brilliant critters, here’s the trick: look for pale, sinuous, spiny, skinny brittle star arms sticking out of some rubble or a crack in a rock (the center part of the brittle star, the central disk, is hidden). If you trust your dive skills to keep you up and off the reef, approach the brittle star, point your dive light to the side or put it against your belly and wave some water towards it. Rapid bioluminescence will race up and down the arms. Brittle stars are nocturnal and they most likely bioluminesce to frighten predators away when they are attacked. It seems like brittle stars would be too crunchy, but Spanish Hogfish that uncover them in the daytime seem to love them! They gobble them up like potato chips! Anyhow, I hope your holiday is filled with joy and, if you enjoy diving or snorkeling, that you get lucky finding Christmas tree worms, sea stars, glowing brittle stars and such! 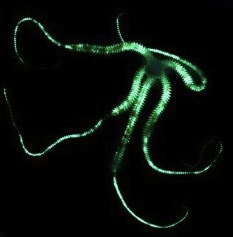