Three cacti species that dominate the arid landscape of the ABC islands are locally known as Yatu (Stenocereus griseus), Kadushi (Cereus repandus) and Kadushi di Pushi (Pilosocereus lanuginosus). They are commonly grouped as “columnar cacti”, as they are hard to tell apart at first glance. However these magnificent cacti species, which can grow up to 10 m (~32.8 ft) tall, deserve a closer look. Here are a few tips to help you identify each one of them:  Yatu grows straight up and branches out close to the ground; its thorns make up neat rows of rosettes. Kadushi is the largest of the three cacti species and looks more like a tree as it branches out further from the ground; its thorns form dense rows that stick out in all directions.  Kadushi di Pushi has long white hairy spines and yellow prickles on the top of its branches.

All three species are abundant on the ABC islands, and the IUCN categorizes them as species of Least Concern. However, they are all listed in Appendix II of CITES, meaning that their trade is strictly regulated. The cacti have a very important ecological role: their fruits and flowers, which bloom only at night, provide critical food resources for a variety of the islands’ bats, birds and reptiles. Bonaire’s endangered Yellow-shouldered Amazon Parrot is especially dependent on the Kadushi’s red-purple fruit during periods of drought. The nectar-eating bats of the ABC islands, including the endangered Southern Long-nosed Bat, have a very special relationship with the cacti: they need them for food (the flowers of the cacti only boom at night, which suits the bats perfectly), and in turn, the cacti need the bats to pollinate their flowers.

The Yatu and Kadushi form an intrinsic part of our islands’ history and culture, as Bonairians, both past and present, have found many uses for them. The flesh of Kadushi is used to make medicine, shampoo and even a delicious soup (sopi di kadushi) typically eaten with fish or salted meat. In Rincón, the Cadushy Distillery produces the unique, local kadushi liquor, combining the extracted flavors of the cactus with traditional Awa di Lamoenchi (a sweet and refreshing lime beverage). The fruit of the Yatu has traditionally been used to make jam, and the cactus also has a number of traditional medicinal uses where Yatu extract was used as a cure for kidney stones and the cacti’s dried branches were roasted and used to cure an upset stomach. Yatu is also used to build cactus fences, which re-root easily and are covered in enough thorns to keep out goats… and uninvited guests. With a discerning eye, you can begin to distinguish the abundance of cacti species present on Bonaire, or you can enjoy their flavor in local cuisine and beverages. 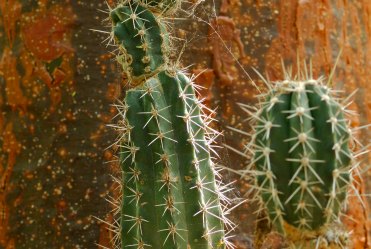