Mangroves are known as palu di mangel in papiamentu. Mangroves are closely tied to seagrasses and coral reefs. They have a very important functional role in coastal ecosystems: they act as a nursery for many juvenile fish, like the rainbow parrotfish, until they are large enough to move to seagrass beds and coral reefs. In total, between 60 and 80 different species of fish can routinely be found in mangroves. Mangroves also export much needed organic compounds which are in short supply on coral reefs. Finally, they also provide roosting and breeding grounds for many aquatic birds- on Bonaire, mangrove-rich Lac Bay is designated as both a RAMSAR site and Important Bird Area.

The dominant mangrove species in Lac Bay is the red mangrove (Rhizophora sp). Red mangroves (Rhizophera sp.) are survivors- they live in extremely salty, brackish with low oxygen content through special adaptations such as breathing through lenticels (pores) in their prop roots (like a “snorkel”). The prop roots form a substratum for many different species: bivalves, tunicates, sponges, hydroids and many more. These roots – full of life – are often very colorful and many tourists enjoy snorkeling through the channels in the mangroves to explore them. All species of mangrove extrude salt through their leaves, which is why the leaves glisten in sunlight. Until the advent of synthetic lines the roots of the red mangrove were routinely used to strengthen natural fiber lines used in fishing. Traditionally they were used much more intensively than today for example in boat building and basket weaving as well as to produce charcoal. These mangroves also provide a buffer from storms and surge: living at the interface between land and water, mangroves provide a valuable service in preventing coastal erosion and mitigating wave action. 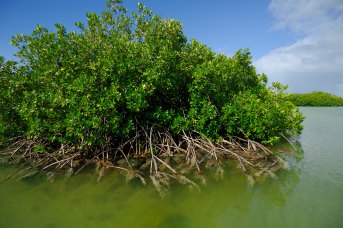