Seahorses are known as Kabai di awa in Papiamentu. Seahorses do not have pelvic or caudal fins, instead they use a propulsive dorsal fin and two small pectoral fins to stabilize their bodies and steer while swimming. They are slow swimmers, and typically wrap their tail around a soft coral, sponge or seagrass where they rely on stealth and serendipity to feed on small crustaceans that pass by. Keep a close eye on the reef when you are diving, and you may be lucky enough to see one of these little creatures. Once you spot one you’re almost sure to regularly find it in the same place- seahorses tend to have high site fidelity to their home range, particularly during the breeding season. Seahorses are known for their distinctive breeding, where males carry for the young. After an intricate courtship “dance” the female seahorse puts her eggs in the males’ kangaroo-like brood pouch, where they are fertilized. The male typically carries the young for two to four weeks, nourishing and protecting them. 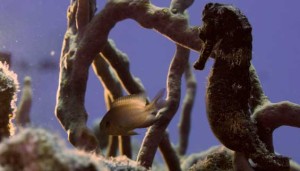 On Bonaire, one iconic seahorse species is the Longsnout Seahorse (Hippocampus reidi), which inhabits our reefs, seagrass beds and mangroves. The Longsnout Seahorse forms monogamous pairs for the duration of the breeding season, where the male only accepts the eggs of one female to store in his brood pouch. They grow to approximately 17cm in height, with a slender body and a distinctive long snout. They range in color from yellow to red, orange, brown and black, with small brown specks on their body and tiny white specks along their tail.

Seahorses are particularly vulnerable to exploitation because of their high site fidelity, structured social behavior and relatively sparse distribution on the reef. The Longsnout Seahorse is listed in Appendix II of CITES, meaning that their trade is strictly regulated. In 1996, the IUCN Red List categorized the Longsnout Seahorse as Vulnerable species due to illegal harvest for aquaria trade, accidental bycatch from shrimp trawling and harvest for folk medicine. They are now listed as Data Deficient, but are believed to be particularly susceptible to decline, especially given their popularity in the pet trade. So, when you see them on a dive, remember that we want to protect these animals- keep your distance (cameras included) and watch your hands and fin kicks.