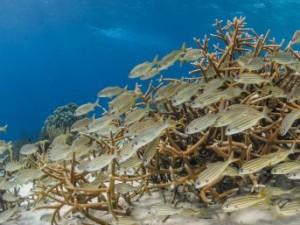 Staghorn coral (Acropora cervicornis) is one of the most important reef-building corals within the entire Caribbean region. This large branching coral often dominates reef communities: not only does it grow very fast at a rate of 10 to 20 cm a year, but it is also highly competitive and can overshadow other shallow coral colonies. Staghorn coral is named after its long, cylindrical branches that resemble stag antlers; these branches provide shelter for a plethora of reef species. Staghorn coral colonies grow through a process known as fragmentation: when a branch breaks off, it attaches itself to the substrate and forms a new colony. Individual colonies also reproduce sexually once a year, during which they release millions of gametes into the water column (known as spawning). 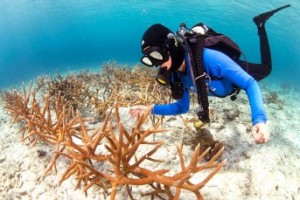 While it was once one of the most abundant stony coral species in the Caribbean region, the population of Staghorn coral has now been reduced by 80-98% since the 1980’s and the IUCN Red List categorizes it as Critically Endangered. Staghorn coral colonies face threats such as white-band disease, bleaching (from stressors such as increased temperatures, and pollution (e.g.oxybenzone-containing sunscreens, agricultural and industrial runoff) and sedimentation (worsened by near-shore deforestation and development). Many steps have been taken within the Dutch Caribbean to protect this critical coral species. Locally, the Bonaire Coral Restoration Foundation maintains Staghorn and Elkhorn Coral nurseries and transplants successful corals to our reefs. STINAPA and collaborating researchers regularly monitor coral health on our reefs so that our park managers can better target conservation efforts and gain valuable insight into what protection measures are most effective.