At Keepsake on the south side Klein Bonaire, a large section of the reef collapsed in an underwater landslide. On the morning of January 20th, STINAPA personnel investigated the site. The collapsed area is approximately 20m SW of the mooring buoy, starting at a depth of 12m. The collapsed zone extends to a depth of at least 40m. The total length of the collapsed zone is at least 30m, if not longer. The width of the collapse is approximately 16m near the top, and 28m wide at a depth of 23m, widening further at deeper depths. There were very few living corals left within the affected area. STINAPA personnel attempted to right a few toppled corals that remained, but deemed that the area was too unstable to work safely, as there is a risk of further reef collapse. 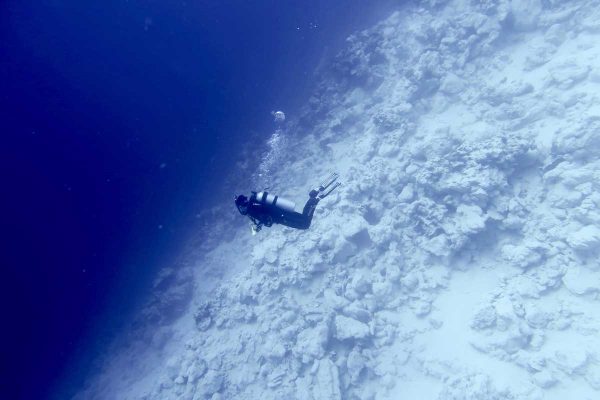 These types of ‘reef collapse’ on steep slopes are a natural occurrence on steep reef slopes and are most likely caused by reef bio-erosion. Living organisms such as sponges, worms, urchins and fish break down coral structures by boring, drilling, rasping and scraping the reef. There is speculation that sound waves from large passing ships may exacerbate this reef instability and trigger the collapse. However, there is no evidence to support this claim at the moment. Another attributing factor could be a 4.8 magnitude earthquake that occurred east of the ABCs on Dec 28th, 2016 at 440m depth which may have played a role in destabilizing the reef shelf. At the moment there is no singular, clear cause of this collapse.

The site is unstable and STINAPA advises that divers and snorkelers stay away from the area both to protect  people as well as prevent further collapse of the reef.