Originally inhabited by native South Americans, and comprised of two of the largest plantations on the island during colonial period, the park is rich in historical and cultural heritage. A trip to Washington Slagbaai feels like taking a step back in time, no trip to Bonaire is complete without exploring this untouched natural wonderland.

In 1634 the Dutch West-Indian Company (WIC) conquered several Caribbean islands from Spain. Bonaire was coveted for its salt pans as well as for its role as a meat supplier for the WIC’s naval base on Curaçao.

In 1791 the WIC went out of business and Slagbaai was turned over to the Dutch government. This area continued to serve as Bonaire’s main plantation where African slaves produced goat meat, salt, chalk, wood and charcoal for export.

After the abolishment of slavery in 1863, management of the island became too costly for the government. On September 1, 1868, the Government of the Colony of Curaçao sold the island of Bonaire in parcels by public auction. The northwestern part of Bonaire was called Slagbaai and over the years the property changed hands a few times. In 1920, the northern half of Slagbaai was sold to the brothers Julio and Gijsberto Herrera and renamed “America”. The Herrera brothers built a new entrance, which still functions as the Visitors Center today, as well as a house for the plantation supervisor and a small store with an adjoining office. This area quickly became the most important part of the plantation, as this was where locals could apply for work and receive their wages. As a result, the area became known as the capital of America – Washington. The Washington and Slagbaai plantations supplied salt, charcoal, aloe extract, divi-divi pods, and goats for export to Curaçao and Europe. In a good year, over 3,000 goats would be shipped to Curaçao from the bay known as Playa Funchi.

Divi-divi pods were highly valued for their used in leather tanning in Europe. Since the divi-divi pods of Bonaire were superior to those of other sources, merchants would pay a high price for these local pods. In fact, unscrupulous traders began importing divi-divi pods from South America to Curaçao and selling them as Bonairian pods at the market. To protect Bonaire’s divi-divi product, a Certification of Origin for divi-divi pods was introduced, verifying the authenticity of Bonaire pods. Another important crop was aloe vera, which was harvested after the rainy season when the leaves had the most juice. The workers were almost exclusively women from Rincon who would camp on site for a week in huts made from cactus wood and go home on Fridays for the weekend.

Over the years, various members of the Herrera family owned parts of Washington. In 1931, possession of the entire property was obtained by Julio Caesar “Boy” Herrera, who worked on improving the plantation he had loved his entire life. In 1967, Boy Herrera became ill and in fearing that his heirs would sell this natural area to developers, he negotiated with the government to purchase the property upon his death. In this agreement he included a condition that the park shall be left undeveloped, for the enjoyment of the people. As a result, on May 9th, 1969, National Park Washington opened its gates to the public. It was the first nature sanctuary in the Netherlands Antilles. In 1979 the remaining section of the Slagbaai plantation and adjoining property called Brazil were added, officially creating the Washington Slagbaai National Park.

The name ‘Slagbaai’ is often said to derive from the Dutch word ‘Slachtbaai’, meaning slaughter bay. Historians, however, say the name more likely originates from salt harvesting activities since the times of the original Indian population. In the past the bay was called ‘Sla baai’. ‘Sla’ comes from the Papiamentu word ‘salu’, meaning salt.

The management of this entire area was entrusted to STINAPA N.A. a Dutch acronym, which means Stichting Nationale Parken Nederlandse Antillen. You are welcome to stop in at the Visitor Center at the entrance of the Washington Slagbaai National Park to learn more about the colorful history of the Park

See if you can you find each of these historic structures on your tour, learn more about each below:

Boka slagbaai
The 4 iconic yellow buildings found along Slagbaai were built by the Neuman and Jeserun families in 1868-1869. They have been restored several times after storms and hurricanes, with the last renovations occurring in 2001.

Supervisor’s house
The supervisor’s house was the first building erected here. The supervisor, employed by the plantation owners, oversaw fishermen, shepherds, harvesters, and other workers. The longest residing, and hence best known supervisor was Jerry Martijn who worked for the Debrot family. During this period the building was expanded to accommodate 2 indoor salt grinding mills, enhancing Slagbaai’s salt production capabilities.

Mangasina
‘Mangasina’ means storehouse and was used to store salt, aloe vera, divi divi pods, charcoal, goat manure, goat skin, chalk from burnt limestone, wooden beams, and bones. Bones from goats and sheep were sold to Suriname for the production of buttons. Salt was stored for a maximum of two weeks before it was exported, first to Curacao and then around the world. The Neumans were Freemasons, evident by the Freemasons sign engraved on the southern wall near the roof.

Tiendas
This building accommodated 2 stores ‘tiendas ‘ where products like sugar, coffee and flour were sold to workers. In the time of the Debrot family, the building was also referred to as Casa Jerry: as Jerry Martijn stayed here after the supervisor’s house had been repurposed. Fishermen and the forest ranger were also welcome to spend the night here.

Customs office
Ships destined for Slagbaai and the adjacent plantations Brasil and America had to report to the Slagbaai customs office for clearance. As products were shipped every fortnight, two customs officers worked here in shifts of two weeks. The families of the officers lived in Kralendijk.

Saliña (salt lake)
In addition to husbandry and timber production, the Neuman family expanded Slagbaai’s salt pans. Salt produced in Slagbaai was finer than that of the southern salt pans (now known as Pekelmeer). Harvested salt was stored in piles at the back of the lake. Workers would go there in a small boat, ‘ponchi’ to fetch the salt. They transported it to the salt mills through a specially dug canal at the beginning of the lake, the ‘kanal di sal’. 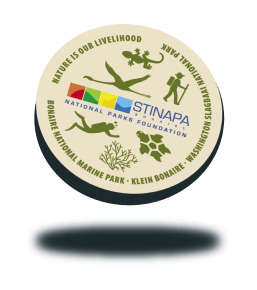